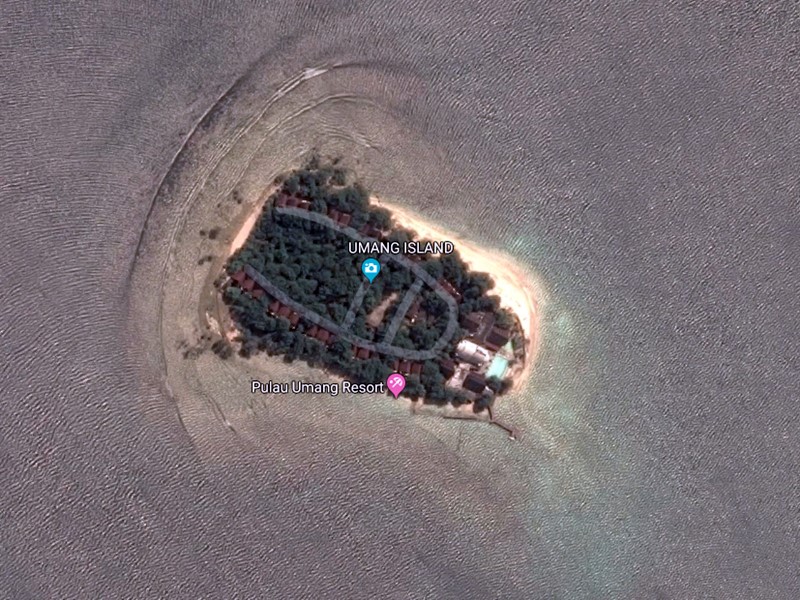 Nestled in the south of Ujung Kulon National park, in Bay Sumur, Padenglang regency, Umang Island is a small beautiful island. It has beautiful West Java sea and mountain scenery.

The location is also very strategic for nature trekkers as it's near the UNESCO heritage site Ujung Kulon National Park. Umang Island is also well-protected from the West Java sea storms as there's Tanjung Lesung beach to the north and Panaitan Island to the west.

Its named, Umang Island, as local peoples believed related to klomang or umang, .the crustacean which have shell as their home. When their body is getting bigger, they usually move to the bigger shells (their ancestors heritage). There are so many klomang found in the beach so people call pulau Umang (Umang Island).

Umang Island is a right place for those who yearn for traveling to a beautiful natural coastal area. The island is adorned by the whitewashed sands, reefs, and trees. There are many tropical almond and coastal cottonwood trees giving the shady and breezy nuance.

The five-hectares private island open to public since 2004 and maintened by a single management, Umang Island Resort and Spa, which offers the same comfort as a star-rated hotel with relaxing ambiance. For example, tTis resort is facilitated by villas for the comfortable lodging.

There are 30 villas here, each divided in two (60 half-villas) with a connecting door. Each half-villa is enough for one family. Half-number of the villas have the sunrise concept (facing to the sunrise direction), while the other half have the sunset concept.

The interior of the villas have the simple, but artistic architecture; with the timber-construction. The lower side is guest room and the rural-styled bath room. The upper side is the romantic bedroom where the stars at night can be seen through the glass roof. In front of the villas, just on the shoreside are gazebos where the visitors can relax while enjoying the seashore landscape, especially sunrise and sunset moments.

Umang island is reachable via a five-minute speedboat ride from Sumurand about four hours away by car from the bustling city of Jakarta. Visitors can even bring your own car because the resort provides a free 24-hour secure parking lot in Sumur, plus an accomodation for driver.

To enjoy the beauty of coral reefs and various species of fish is sighted, visitors must cross over to Pulau Oar (Oar Island). Located in the south-eastern island of Umang, Oar Island can be reached within ten minutes by regular boat engine. And only about 10 meters from the mouth beach island, coral reef divers can enjoy the color.

Oar Island is an island is not uninhabited. Only provided some of the gazebo to stay over while the traveler who wants to pro-snorkling. An instructor provided help lead and enjoy the holiday time when the jet ski, snorkling, and outbond.