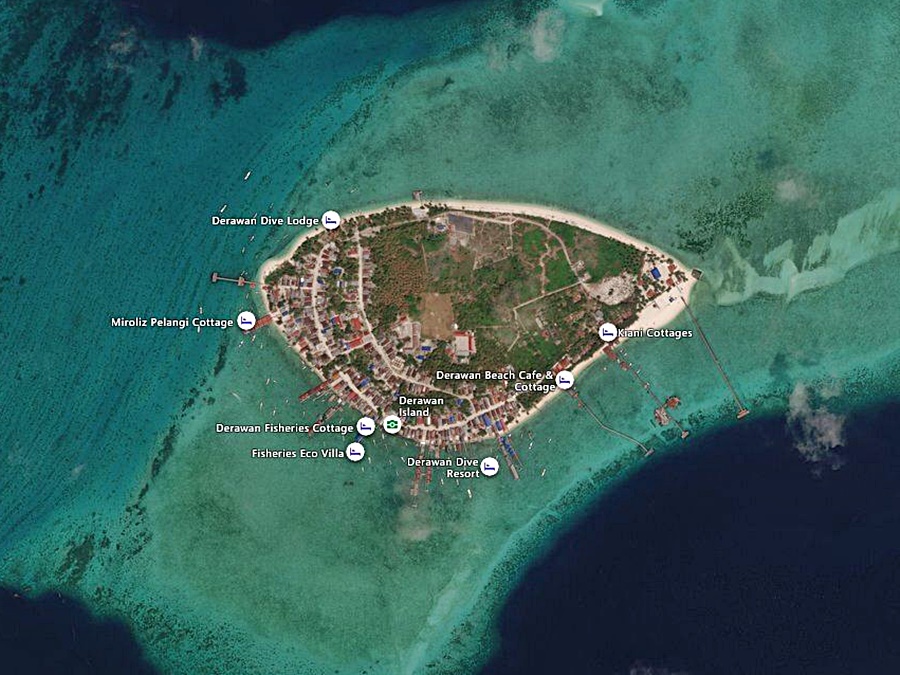 Welcome to the Derawan Islands or Kepulauan Derawan, the tropical heaven in the marine. The Derawan Islands (Kepulauan Indonesia) covering Derawan, Sangalaki, Kakaban, Maratua, Panjang, and Samama Island as well as several submerged reefs and small islets, are located in the Sulawesi Sea, on the coastal shelf of East Kalimantan province.

Well-known as an island with the surface of coloured sea water blue and green gradations, the soft sand carpet, the line of the coconut tree in the coastal coast, with the small forest in the middle of the island that was the habitat from various plants kinds and the animal as well as beauty of underwater nature that enchanted, Derawan islands occupy the third place highest as the destination dove quality in the world and made this island becoming interesting dive and the island of the dream for the divers.

There are two inhabited islands, namely Derawan (1 village of 1,259 people) and Maratua (4 villages of 2,704 people). Fishing is an important income-generating activity for the community. Since the early 1990s, people have caught live groupers, napoleon wrasse, and lobsters, to fill high demand. There are 3 dive resorts on Derawan Islands , while more additional resorts or facilities are in the planning process.

Mostly there are 28 interesting poing for diving activity in Derawan Island. At least, the big five interesting site for diving in Derawan are Derawan island, Sangalaki island, Kakaban Island, Barracuda point, and Maratua Island. Each of the islands has its own distinct features. To explore all the areas you'll need at least 10 days with only one dive at each area.

In Derawan, diver can see the green turtles, white tip, leopard & nurse sharks, barracuda, napoleon wrasse, cuttle fish, Spanish mackerel, jacks, bat fish and the usual reef fish. Excellent distribution of hard and soft corals, in pristine condition, swarming with thousands of anthias and other reef fishes can be spotted in Sangalaki Island . Diver can see a large distribution of sponges and many very beautiful gorgonians.

Fortunately, Sangalaki Island is a National Marine Reserve, and has been spared such a sad and shortsighted fate. Sangalaki is also host to a huge population of mating and nesting sea turtles. In a timeless cycle of reproduction, both hawksbill and green turtles come here to mate and lay their eggs. On an annual average, 20-30 nests are deposited on Sangalaki Island every night. A clutch ranges from 80-120 eggs, so annually that represents more than 750,000 turtle eggs per year on Sangalaki alone.
Villagers who used to earn a living poaching the eggs, now earn a living and help preserve the species by hatching, raising and releasing juvenile turtles.

In Kakaban island, 10 minutes from Sangalaki.there is a prehistoric lake , Jellyfish that don't sting, sea cucumbers, sea snakes & gobbies. It must be noted, however, that in some other areas, particularly around Kakaban Island, the reef clearly shows signs of having been damaged by dynamite fishing.

In Barracuda Point, diver can see the blue tuna and white sharks. Then in Maratua island, variety of larger fish sightings including eagle rays ioffering a beautifull view.

It is fairly easy to reach Derawan Island from Jakarta, Surabaya, Jogjakarta or Denpasar. You can fly to Balikpapan, East Borneo by Garuda, Lion or Bouraq Airlines and the flight takes three hours.

From Balikpapan, fly an hour to Tanjung Redeb, the capital of Berau Regency by KAL Star, Deraya or DAS. If you want to go by sea, guess can take boat from Samarinda or Tarakan to Tanjung Redeb and continue by rented motorboat.