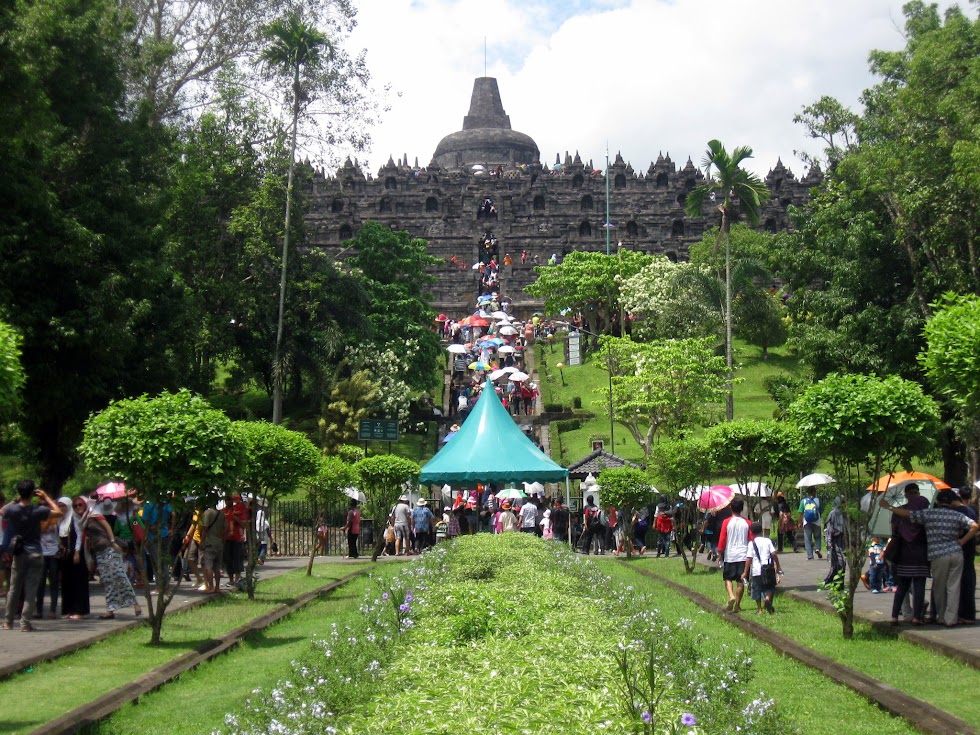 The Borobudur temple, is the largest Buddhist monument on earth. Lying 40 kilometer (25 miles) northwest of Yogyakarta. A mass of forbidding black stone, Borobudur was built between about AD 778 and 850 by the Javanese rulers of the Syailendra dynasty and is one of Indonesia's most popular tourist attractions, drawing millions of people every year. The style of Borobudur is influenced by Indian Gupta and post-Gupta.

Built with about 2.000.000 cubic feet (57.000 cubic m) of gray volcano stone, Borobudur encloses a small hill and is shaped like a stepped pyramid -- some expert suggest that like a lotus that swing in a pond -- the base and the first five terraces being square, and the higher three terraces being circular, the highest centre, 3,15 meter (103 feet) above the base consists of a large individual stupa. Each of the terraces represent the individual stages toward perfection in a person's life.

There are many relief depicted on the terrace walls, include a series relief that illustrate the effect of good and bad deeds in this life, the story of Gautama before he became Buddha until illustrating more philosophycal themes taken from Mahayana Buddhist scripture.

Borobudur was abandoned for centuries - the reasons remain a mystery - and lay hidden under layers of volcanic ash and jungle growth until it was discovered in 1814 by Sir Thomas Stamford Raffles during the English occupation of Java island, the cultural and population center of modern-day Indonesia. In 1907-1911 the fisrt restoration did by Dutch archaeologist and a massive restoration was carried out in the 1970s under the guidance and financing of UNESCO.

This temple suffer a little damage by Saturday's May 28 magnitude 6.2 earthquake that struck Yogyakarta province and Central Java province.